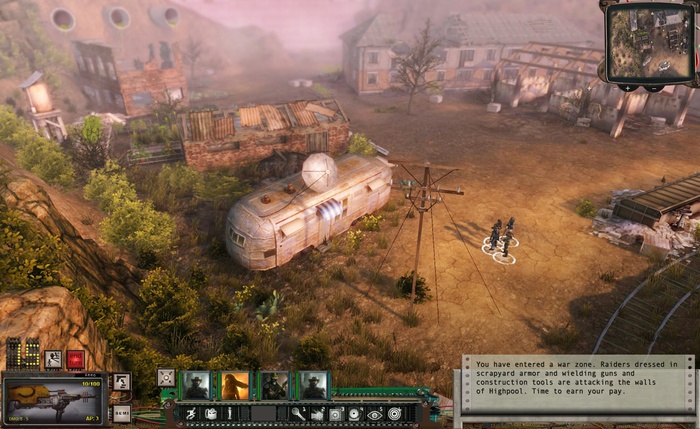 The game will have between 40 and 50 «maps» (they’re compared to Fallout 2’s 23 locations, so it might as well be referring to the overall number of places to visit).
The main storyline will take 20 hours to complete, without side quests or alternative solutions factored in.
On the subject of radio signals: the ether will play a prominent role in the game, reacting to the player and providing music.
CLASSIC is indeed the attribute system, comprising Charisma, Luck, Awareness, Strength, Speed, Intelligence, and Coordination.
32 skills will be present in the game.
Combat skills: Blunt Weapons, Bladed Weapons, Anti-Tank-Weapons, SMG, Shotguns, Energy Weapons, Assault Rifles, Sniper Rifle, Handguns
Scientific skills: Picklock, Safecrack, Alarm Disarm, Toaster Repair, Computer Tech, Synth Tech, Demolitions, Brute Force
General skills: Silent Move, Salvaging, Hard Ass, B.S. Detector, Outdoorsman, Evasion, Leadership, Folklore, Animal Whisperer, Field Medic, Surgeon, Weapon Smithing, Field Stripping, Perception, Barter
Like in Wasteland, you can have up to seven characters in your party.
Energy weapons deal damage proportional to the amount of metal in the opponent’s armor. The more, the higher the damage.

The game begins in a truly Hitchcockesque fashion, with a sudden corpse and mysterious radio signals.
A new faction, the Mannerites, are revealed. Led by Mr Manners, they pay great attention to etiquette and proper behavior. They also eat people, following the red meat with a bit of red wine.
Red Skorpions are provided a little more background, described as a paramilitary survivalist group, similar to the ones existing in the United States today. They also hate Rangers.
The Pistol Packing Priests are confirmed as a priestly group that wants to mop up whatever human trash escaped the scorching blasts of the holy apocalypse. As the name suggest, they favor pistols.
The synths return, as the half-man, half-machine Children of the Citadel believing in the union between man and machine as the next step in the evolution of humanity as a whole. Pure humans are beneath their notice.
The Gippers will also be present. If you’re scratching your head, that’s because they’re a faction built around worshipping Ronald Reagan as a god. The name is a reference to Reagan’s role as Knute Rockne in the 1940 biopic Knute Rockne, All American.
Another faction, the Robinsons, are based on American motivational speakers like Dale Carnegie and Tony Robbinsons. Basically, think positive.
Finally, the Wrecking Crew. They’re your garden variety psychotic raiders, with fun pastimes like raping, pillaging, and making ever more complicated junk armors. Described as perfect practice targets for energy weapons.

New screenshots are shown, including a peculiar shot of a canyon highway rife with tribal markings and other locations in the wilderness.
Finally, the target sales are 200,000 – 300,000 copies, which will allow inXile to continue work on their games throughout the year.