Hi Mr. Miechowski; thank you very much for your time; this are the questions we have for the team

Could you write a brief history of the company?

Metropolis Software is a games developing company from Warsaw, Poland. It is one of the industry leading companies in the country. The core of the team included developers of a succesful title Gorky 17 plus several new members that joined to create the Archangel game. Gorky 17 achieved a status of a top seller in several countries including Russia. Since then the company still has been earning experience as new titles were developed such as Gorky Zero, Aurora Watching and lately Infernal. Recently, we created our own game engine, Nitrous, which proved to be a major step in our progress as this engine allows our graphics team to build up beautiful and detailed environments like in Infernal. This has been acknowledged in reviews of the game throughout the world, and we are especially proud of that. In order to make the physical side of our games very fluent and realistic we have found a partnership with Ageia and we use their physics engine PhysX.

We thought Aurora Watching was an interesting game that had a terrific dificulty in some moments and even being a good game, had some failures in the design? Wich kind of things did you learned from that development as infernal seemed to us a more poloshed one? How many people forms the has your team grow since then?

Aurora Watching was not a full price game, it offered shorter gameplay time than other titles, but indeed we made some mistakes. Fortunately we’ve learned a lot since then and Infernal is a far better game 🙂

The team now is eighteen employees and a few freelancers. During the past few years, we have focused strongly on improving game AI and on how to effectively use shaders to improve graphics quality and overall look. Infernal is a great step forward, thus I think it is not really comparable to Aurora anymore.

With the development Market so centered in USA and the oriental market; being a Poland developer (as it happens with Spanish ones) sure it aint easy nowadays but you have finally got to make both projects come true. Is there any special trick you would like to share with other developers?

Keep working hard and bring gaming passion into work 🙂 Bear in mind that Aurora is two years older than Infernal, and we have come a long way since then.

The graphic engines that move your games are incredibly good and tottally top notch… is it an in-house engine? Are you licensing it?
Will we see other games from other companies use it in the near future?

It is our own technology, made from A to Z by Metropolis. The engine is called Nitrous and powers Infernal. What’s so great about it is that, even though it allows us to create impressive visuals, it still allows the average PC to run the game smoothly.
We are not licensing it at all. This is the core of our development technology and at present we are pretty protective about it 🙂 so right now there are no plans on turning it into a licensed engine.

Which is the secret for such a good performance?

The graphics designers did a great job and on the other hand all levels are very well optimized. The point is to imagine some good looking vision and bring that vision to reality.

Why did you Choose Ageia Physx instead of other physics systems?
Which advantage do you think it has over the rest of the systems available in the market?

We chose it because it’s fast and offers great possibilities. PhysX has a great future, it already allows to create fantastic physical environments but it still has a lot of potential that hasn’t been exploited yet. It is reliable and can simulate the real world very well – that’s what we want from physics engine.

Honestly, difficulty is a word that you can easily attach to almost all games. Games should be challenging otherways players would quit it quickly. Anyway, what is difficulty? When you die a hundred times or when you are stuck in a level? When you die too often, try to play at an easier difficulty level – and in Infernal the easy level is easy enough for almost anybody to master. I have to say, I played hundreds of games in which I got stuck for a while, it happens every time even on easiest difficulty level.

Infernal seem to englobe lots of the clichés from the action movies from the 80’s… which were the references of the team when you designed the game?

Is this your perception? Well, I’d say that in an action game you of course tend to get some inspiration from action movies, but I do not find any specific relation to the 80’s but rather to all action movies.

Can we expect another game from your company soon?

We’re involved in new projects but they are future plans, not before end of 2007 surely.

We think that traditional PC gaming has turned up too «console style» due to the Xbox and PS3 intensive econmic efforts these days and that the programin teames from Eastern Europe are the last hope we have with interesting titles like STALKER, INFERNAL, Boiling Point, Tomorrow War… why do you think has that zone of Europe become in the «last hope» for the traditional PC Gamer?

Actually PC games are still being developed all around the world, including big projects like Crysis. As far as I know, many well known brands like Call of Duty 4 will still also be developed for the PC platform. PC games will be needed as long as console platforms won’t become office machines. And we think it won’t ever happen, at least not in the next 10 years 😉 There have always been prophets that announced the end of PC gaming, while it’s still alive and in really good shape. It does not mean that the console market will stop growing, because it’s obvious it will be expanding, but it means that PC gaming still has future. And as I mentioned before – this future means development all around the world, not only in Eastern Europe.

Do you expect developing for the Next Gen consoles? 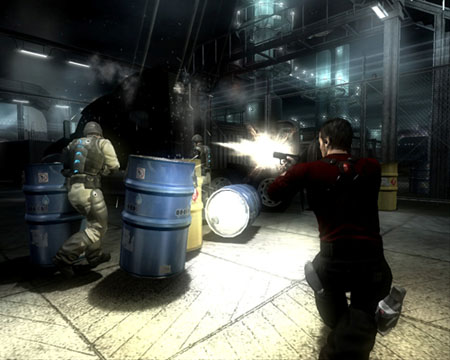 Wii fun is based on a specific controller and that is some kind of a revolution in gaming, at least in gameplay ideas regarding controllers. X360 is a fantastic platform in terms of hardware and what developers made for this hardware – I mean many studios really used the opportunities given by this hardware to make cool games. And I’m quite sure we will see many more fantastic X360 games. I can’t say too much about PS3 ‘cause I haven’t had much chance to play it yet.

Thanks for your time and regards, we hope to enjoy your new game ASAP.