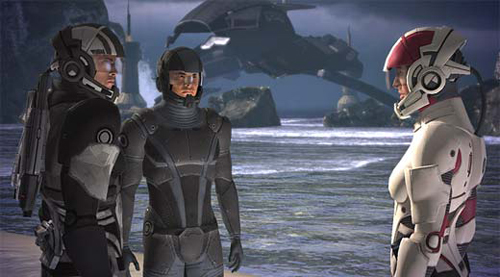 -Level cap has been increased to Level 120

-Physics will be power by Havok

-Bioware has spent an enormous time on facial animations and charater movement animations, so expect animation quality to be at the very top.

-BioWare is using the Unreal Engnine 3 for graphics, with many custom changes made, graphics will be better than in Gears of War 2

-Water is confirmed to have fluid simulation, also, if a player or NPC dies on water, the players body will slowly sink, this also applies to weapons and certain objects

-Mass Effect 2 will have up to 5-player CO-OP, depending on the host players decision of how many players will be able to assist him/her

-There will be a Multiplayer component called Survival, where players will crash on a planet and battle to survive against endless hordes of enemies, the score will be determined on how many enemies will be killed and how much time players will be able to survive, there is no end to this mode, it’s a very similar mode to Gears of War 2’s Horde.

-Armor has to be repaired, armor will also react to different weapons,
bullets will damage it, fire will melt it, ice will freeze it,…

-The player can now lead a squad of 2-5 members, the player decides how many squad members will be on each mission

-The Citadel is now much larger, and whenever a player visits the Citadel all members of the players squad go with him/her, the squad will interact with other NPC’s if you allow them to

-Battles wil be on a much larger scale, reported scale is the same as in Gears of War 2

-The Galaxy has been expanded, you can now explore 8 times more planets than in Mass Effect, also, every planet now has a bigger scale, players will be able to set up small bases on planets with a sustainable atmosphere

-Weapons can be upgraded and customized, the weapon arsenal has been expanded, the player can now carry a bionic arm on each arm, the player can dual wield not just pistols, but also shotguns and semi-automatic weapons

-One new weapon is called «The Scilary», it’s a missile based weapon, the player marks a targed on the ground and then shoots a missile into the air, the missile is then split into multiple pieces and hits the target and an area around it

-The player can now equip a knife, the knife can be customized and upgraded, the knife can also be used with different powers, i.e. the knife can be thrown and then brought back, the knife will also react to environment hazards, i.e. a knife over fire will cause it to catch fire and eventually melt

-There will be Boss Battles in the game

-Depending on the decision made by the player on Noveria to either spare or kill the Rachni, they will assist you during a crucial time or you will be left alone

-Preston Watamaniuk, the Lead Designer hints at more and larger environment hazards,
for example a volcano erruption than can destroy a base built by the player, another example is an ice storm of different colors, dependning on the planets atmosphere

-The primary planetary exploration vehicle can now be upgraded and customized,
it can also be expanded to carry up to 4 members of your squad

-The armor can now be upgraded and customized to the players liking, similar to the weapon customization, the player can now select a certain part of the armor, i.e. the left shoulder and put a small picture on it, i.e. the Earth’s flag

-The second mission will be to save a squad member that was believed to be dead in Mass Effect, depending on the decision made on planet Virmire (the cloning facility mission), you will have to rescue the squad member left behind,
the story will explain how the squad member survived the detonation

-Planet Eden Prime can now be visited, explored and the player can now build his own house on the planet, same with many other planets