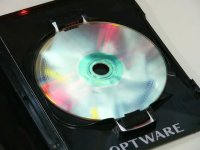 Sony has recently wrote and read data on a medium which is the equivalent to a 7-layer disc, courtesy of its “Micro-Reflector method” – a multilayer recording technology using holographic recording. Sony took the opportunity to blow its trumpet at the recently concluded ISOM ‘07 in Singapore, making a speech concerning the speeding up of data transmission speeds, improvement in memory density per layer as well as increasing the number of recording layers even more so that an absurd amount of data can be stored on a single disc (and to think they already have trouble filling up a Blu-ray disc at this point in time…)

So far, Sony has managed to achieve a memory density of 1.2GB per layer, calculated in terms of a 12cm disc. So far all experiments have involved a small disc of about 8cm in diameter, where interference fringes were recorded on a concentric area of about 200?m in the diametrical parallel direction. At the end of the day, this effort will see Sony push itself closer to its goal of manufacturing a 500GB 20-layer disc by the time 2010 rolls around. Would we still be storing data on physical media by then, or would Google control the entire world’s storage without doing evil? Hopefully the US dollar will be worth something then though.